We are a proud member of the Cypress and Tomball area community! With the assistance of Farmers Insurance Group of Companies, we are committed to serving the communities where our customers live, work and play!

We work tirelessly to rebuild lives and lifestyles after disasters, improve and support education in our communities, and have dedicated ourselves to a culture of active communal engagement and volunteerism throughout the country.

When a catastrophe hits, who is going to be there for you?

As an insurance company, Farmers is dedicated to covering what’s important to you.

When disaster strikes though, Farmers is committed to going above and beyond for our customers and communities, delivering world-class response and recovery services anywhere in the country. We partner with organizations like the American Red Cross to invest in disaster relief in preparation for disasters. We’ve also helped in long-term disaster recovery efforts in Joplin, MO and Sea Bright, NJ, where homeowners have struggled for years to get back into their homes. We’re continuously committed to disaster preparedness and education, helping to prepare communities for disaster through our Disaster Recovery Playbook.

Although Kim retired from her teaching career, she remains an active volunteer in several Cy-Fair ISD schools. Often seen hugging students as they enter and leave school, Kim provides more than an education to children she is proud to serve.

Cy-Fair Educational Foundation (CFEF) held its 8th Annual Salute to Our Heroes Gala at the Omni Hotel. Joe Myers Ford Lincoln is generously underwriting this gala that honors the brave men and women who have served to protect our freedom and liberty. 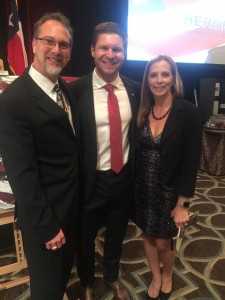 Seen here with Kimberly and Jeff Hastings of Cypress, Texas, Gerald Coffee was the guest speaker and Cypress’ own Bill Brown emceed the event. Coffee served our country as a naval officer for 28 years; much of that service was as one of the longest held prisoners of war in the communist prisons of North Vietnam. His military decorations include the Silver Star, the Distinguished Flying Cross, two Bronze Stars, the Air Medal, two Purple Hearts, and the Vietnam Service Medal with 13 stars.

Salute to Our Heroes has raised more than half a million dollars over the past seven years. Proceeds from this event have funded three endowed scholarships.

CFEF was established in 1970 as a non-profit to raise money to fund a scholarship for high school graduates in the area. Over the past 45 years, the Foundation has grown tremendously through the efforts of the Board of Trustees and the generosity of the Cy-Fair Community. The Foundation has awarded more than $6 million in scholarships to 1300 graduating seniors. CFEF is a 501(c)3 non-profit organization, all contributions are tax deductible, as allowed by the law.

Sponsorships and tickets are available for Salute to Our Heroes